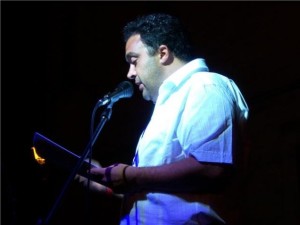 Vincenzo Santoro has been organising projects and events on music and traditional cultures of Southern Italy for many years. He has published numerous essays and books on musical traditions of the Salento region – “ Il ritorno della taranta. Storia della rinascita della musica popolare salentina,” (A history of the rebirth of folk music of Salento) is his latest publication. He is the project manager of the ’Archivio sonoro della Puglia’ (an archive of Puglia’s traditional sounds), at the National Library of Bari. Vincenzo Santoro is Head of the Culture, Sport and Youth Policy of the National Association of Italian Municipalities.

The Accademia has asked Vincenzo Santoro the following questions:

1. Vincenzo Santoro – from being an industrial expert to becoming an author of traditional culture books – numerous publications that celebrate ancient songs and sounds. How did your passion for folk music and dance start?

Paradoxically, my interest for Salento folk culture started away from the Salento region. It all started in Pisa in the early nineties when, during my university days, some friends introduced me to this extraordinary world. I was completely won over, and began a very passionate journey – a journey not yet concluded.
2. What is the most interesting aspect of your job?

I would say that, first of all, is the opportunity to come into contact with so many wonderful people, who often have exciting stories to tell. Then is being able to contribute towards the “evolution” of the cultural heritage of Puglia (at least that’s the idea …).

3. Tango in the 80s, Latin American dance in ’90s, and now … it’s ‘Pizzica’ time (the ‘pinch’ dance). Is this a cultural evolution that has led to Pizzica, or is it simply a fashion phenomenon?

I would say both. Undoubtedly, the success of the music from Salento in recent years stems from general fashion trends. But it’s also true that at the heart of its music is an important cultural heritage, which has been characterising the Salento region for many centuries.
4. In some seventeenth century illustrations, Puglia is depicted as a woman whose dress is swarming with spiders. At her feet are flutes, tambourines, and violins: the musical instruments that produce the sounds needed to heal from the bite of a spider. There has been much ethno-anthropological research on ‘tarantismo’ (the name of the syndrome caused by the bite) and its music therapy. What is the ‘Taranta’ dance for you, or rather, how would you define this dance to an English spectator?

I would define Taranta as a ritualistic dance for “recovering” from the effects of a spider’s bite (Taranta is also the name of the actual animal). In popular belief, the venom of this spider caused a physical and a psychological debility in anyone biten by it (Tarantism). Only a very rhythmic dance, the Tarantella, could ‘cure’ those affected by the spider’s venom. A specialized orchestras played the Taranta, for days and days, until the “sick”, danced off the effects of the venom thus making a full recovery.

However, this was indeed a popular belief, a kind of mass suggestion, because spiders from Puglia don’t produce these effects.

The phenomenon of Tarantism is described masterfully by Ernesto de Martino in his 1961 book: The land of remorse: A Study of Southern Italian Tarantism. (Translated from Italian by Dorothy Louise Zinn, with a foreword by Vincent Crapanzano. London: Free Association, 2005).
5. What exactly is Pizzica?

The Pizzica, or more properly called the “Pizzica-Pizzica” was the type of music that accompanied a dance at old traditional festivals but that was also used in ritual therapeutic Tarantism. But we must not confuse the two dances: In Tarantism there is a solitary dance by the ‘tarantato’ (the person affected by tarantism), who performs a true ritualistic dance, whereas the falk dancing at the festivals was, and still is, performed in pairs.
6. What about the ‘Neo-Pizzica’?

This expression refers to a “contemporary” interpretation of the traditional Pizzica-Pizzica dance which has spread in the Salento region in the last fifteen years. This modern interpretation takes into account some features of the old dance style, but introduces a sensual courtship dance display.
7. The Pizzica has been performed in countries as far as Beijing. Are there any plans to bring the ‘Notte della Taranta’ (the night of the spider) a little closer to home, to London maybe?

I would say that the Night of the Taranta, will visit any city that care to invite them so … we look forward to receiving an invitation to come to the UK!
8. What was the most rewarding moment of your career / life?

I would say that the publication of my last book, The Return of the Taranta, has been a very rewarding time; it also gave me an opportunity to give something back to Puglia by narratting a piece of its history.

9. What was the most difficult and how did you overcome it?

Certainly the death of my father when I was much younger. There are events that are hard to comprehend. We only overcome them with the love of those around us.
10. What is hope?

Well … maybe it’s just something that helps us overcome difficult moments.
11. What is perfection?

It does not exist in man.
12. What is your next dream to realize?

We’ll see … there are several projects in the pipeline!
13. What is your message for young people who are around the world in search of affirmation?

Invest in your talents, do not to lose heart and be curious about life.